Last week I photographed artwork for a local artist’s Masters Degree.  The work was fantastic and just my style; with lots of brocade and silk, in red and black.  I really enjoyed this type of work and would like to get more jobs like this! Any artists out there need their work documented?

Just finished editing some photos from a shoot with Kerry X, an ex-Hobartian who does burlesque in Melbourne. We are both very pleased with results and I have plastered them all over several of my on-line galleries including facebook and myspace. 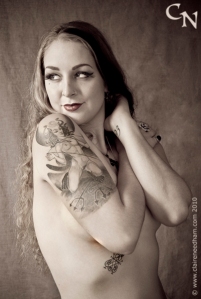 In March I flew over to Melbourne to photograph the alternative fashion show Circa Nocturna. There were some fantastic designers and models. It was literally a whirlwind trip thanks to the intense storm over Melbourne; Not being able to land due to lightning and Tullamarine Airport shutting down, then finding traffic jams in the city, the train service shut down, enormous hailstones and a tonne of water in the streets!  It ended up taking me about 5 hours to get to the venue from leaving Hobart airport!! I was a bit washed-out before night had begun, but everything worked out fine and I had a great time. I tried out my new camera and flash too 😀

My photos are here and some got published in this article on stylemelbourne.com

During an April trip to Melbourne, I was keen to do a shoot with someone up there. My friend Samantha from Alternative Modeling Agency, put me onto a lovely lass; Elissa. Elissa took me to an awesome location which I found interesting enough by itself. We got a few different looks/backgrounds and I’ve put some up on my Myspace.